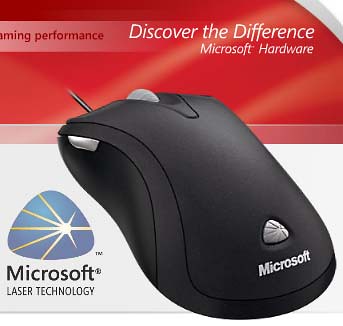 My old faithful Intellimouse Explorer’s scroll wheel became clogged on what must be the combined microscopic remnants of a thousand lunches eaten at my desk. When I noticed an actual scrolling callus developing I decided to throw on the coat and walk the long block up to CompUSA for a replacement.

I knew I wanted a wired mouse since I already have enough battery anxiety in my life — battery anxiety being the constant nervousness brought on by countless battery powered life necessities. And even though it was being targeted at gamers, I opted for the laser mouse 6000, because well, let’s face it, it has a laser in it and the model number is 6000, which is very high. The old kind, optical, is just a LED of some kind I guess. When you turn it over you can’t see the laser though, it is an invisible laser.

This does seem to be quite precise, which is the whole selling point of the lasers. I am new to this concept, since my old one seemed precise enough, but I have noticed that with 1600×1200 resolution and occasionally trying to move images one pixel at a time or click on very small buttons, this mouse does a good job.

My complaints are all based on the fact that it is omni-handed, or whatever you call something that is made for right and left handed people equally. This screws up the general feel and puts the #3 and #4 buttons in odd places, which I’m not happy about. Still I sit here long enough to be able train my hand to get used to it.