You know you are doing okay when your boat has a boat. … A Shadow Boat basically a boat that follows your yacht around and holds all the toys (helicopter, cars, boats, etc.) that might otherwise take up valuable lounging space on your megayacht. … [via Luxist]

The thing this seems to be missing is some kind of Starship Enterprise style docking mechanism. Ideally you’d build one mega-yacht and then detach the crew and copters and whatnot when you wanted to head into some remote bay for some quiet time. Heck, the crew would probably prefer it too, they’d have their own boat to party on.

I have tried all kinds of automatic tagging tools in my day with very limited successes. MusicBrainz in its original incarnation was useless for my needs. I could name all the rest, but why, since hardly any of them work well.

The other day my brother Kevin mentioned a new alpha-stage product from them called Picard. From their overview:

Picard is the next generation tagger that will soon completely replace the classic MusicBrainz Tagger. Picard is an album oriented browser (as opposed to track oriented) and thus works quite a bit different than the old tagger. The 0.6 release of Picard does not make use of any fancy track lookup schemes like acoustic fingerprinting or text index look-ups. Even though Picard does not support these features, some users find they can tag music files faster with Picard than with the old acoustic fingerprinting tagger.

I have been using it for about two weeks now. The software itself is still really buggy, it crashes constantly, but I can see where they are going with it and I like it. One of the keys is the quality of the MusicBrainz album database, and it is quite good, although it lacks album art most of the time and definitely isn’t the best database out there, allmusic.com has consistently better data. And the search is quirky, doing things like searching for collaboration albums (“Calexico and Iron & Wine”) or misspelled titles is hard. But when it works it is wonderful.

iTunes isn’t making it any easier on me, since I have to remove the albums from the library, tag them and then re-import, which means losing all my rating and playcount information.

But at least now, before I import anything I run it through Picard first.

For “light duty” and running and whatnot, I have a 1gb iPod shuffle. Since my regular iPod is temporarily out of commission, (that is a story for an upcoming article) I’ve been using the shuffle day to day. I loaded some kick-ass songs on it, but no matter how kick-ass those songs are, once you’ve heard them all a few times an overwhelming need to get new songs appears.

I popped the sucker into an available USB slot and load iTunes. Once there, I cleared a bunch of songs and added some new ones. It would take 2–10 seconds per song to “update” and everything looked hunky dory. Except later while adjusting the seat on the stationary bike and finding out that none of my changes had taken and I was stuck listening to the same stuff as the day before. In escalating degrees of aggressiveness this same pattern happened for five straight days.

Finally, I deduced the problem and solution.

My problem was that since I’m constantly plugging in flash cards, external harddrives and stuff, drive letters get mixed up and the shuffle is too dumb to try and pick a new, empty one. It just goes with whatever you set it up originally on even if there is already something there. I have no idea where iTunes thought it was copying those files to, but it wasn’t where I wanted.

An airplane taxies in one direction on a moving conveyor belt going the opposite direction. Can the plane take off?  http://www.straightdope.com/columns/060203.html

[via this Straight Dope hacked RSS feed I found]

Is the situation clear? A plane, 747 say, is put on a giant treadmill in such a way that the plane is stationary to an outside observer. The plane gets going faster and faster and the belt and wheels spin furiously, but the theoretically the plane is supposed to be able to take off. Supposedly the engines will pull the air backwards and allow the jet to takeoff normally.

Here’s a good case where some visualization would really help me believe this (I mean I guess I believe this to the extent that Cecil is a smart person(a) but I have doubts at the core my inner engineer). Sounds like a good job for the Mythbusters. 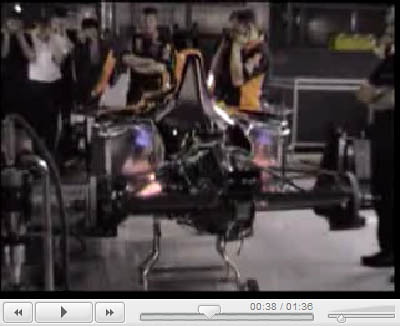 Thermodynamics 101, brought to you by the warmup sequence of a Formula 1 motor

Here we have an V10 F1 engine being revved hard, without the carbon fiber engine cover, on stands, at night. They manage to get the exhaust pipes to a seriously beautiful glow before they have to shut it down.

Normally you would never do this without either running the car — F1 cars like sharks in that they have to keep moving to keep cool or else they overheat in a matter of ninety seconds or so, engine idle speed is around 8,000 rpm — or having dedicated cooling systems around.

Since this is pretty reckless, I suspect this might have been the last days at Arrows, a team that quit F1 at the end of the 2002 season. It jives with the Orange uniforms and markings on the car. If anyone knows different let me know.

Slip, scoot, spin, slide – go for a ride on your own backside. A fun new twist on sledding, Sno Slider’s like growing a tough plastic shell just for winter sports. Attaches by a simple harness – no more dragging a heavy sled up the hill; just walk to the top and sit down – you can’t fall off. Comes in red or blue – we’ll choose for you.

Plus I’d imagine that holding that position going down the hill would be a bit of a pilates style ab workout too.