I just ordered a new notebook.

I need this because Emily uses the main computer at home during the day for her business and since we are still a virtual company with no office space, I require something that I can plug in at Starbucks and I didn’t want to be like this guy.

The research for this took way more hours than it should have — something we are hoping to eventually address with Notches btw.

I did a low-budget, average user notebook buying guide from a couple months ago and while much of that transfers over, I am pretty hard on machines and have some specific requirements. My brother Kevin has one of these too and he’s happy with his.

Anyway point by point here’s what I went for:

The other main option considered was the Asus R1F tablet PC, but I made the final call on screen size and resolution. In the same field as the M65 I looked at the Thinkpad Z61p, but it seems that it was a little thicker, a little heavier, and IBM wouldn’t give me a business lease. Dell came through with a superior buying process. 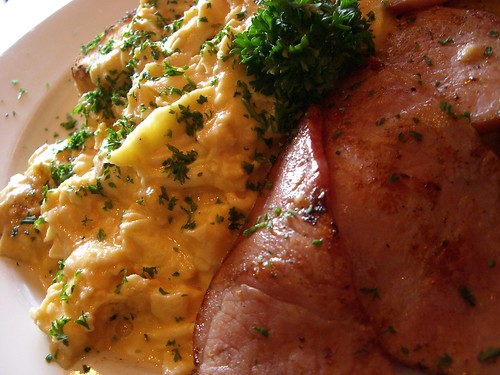 I’d like to use a metaphor from Grey’s Anatomy, season three, episode six. In a ham and egg breakfast, the chicken is involved, while the pig is committed.

In this spirit, I have officially resigned my position at Ann Taylor and as of November 27th will be full time on Notches, Inc. the startup business I have mentioned in this space before. I’m thankful to them for the opportunities I have been given over the previous four years, but the time to move on has arrived and I’m incredibly excited for what comes next.

Sleep is a big deal for me and I take the optimization challenge seriously.

I regulate caffeine. I can’t have red wine after 6pm — it induces restless-leg-syndrome, but all over — I don’t sleep as well when I don’t exercise.

Breathe Right strips are awesome for sleeping. I use them almost every night during high allergy seasons. I sleep noticeably more soundly with them on.

I also wear them running like the NY marathon winner pictured above.

Go with the tan real brand, store brand ones sucks, and so do the clear ones. Buy the small/medium size unless you are in the top 5 percentile for large honkers. Put them on after the lights are off though because they are sexy-kryptonite.

I have a knock-off Tempurpedic that I bought 4½ years ago from abed.com. I can’t rave about it enough. It is entirely possible to fall asleep and wake up 8.5 hours later not having shifted at all. The difference between my fake one and the much more expensive genuine brand ones is the density and thickness of the memory foam. The guy on the phone seemed straight with me at the time and said it made a difference if you weighed over X pounds. I don’t remember what X was, but I was comfortably under it and expected to be for the fifteen year life-span of the mattress. It has help up too, indistinguishable from the day it was delivered.

Six or so years ago my brother Kevin bought me a Logitech Force Feedback Wheel w/ pedals as a present. I didn’t use it for the first couple years because I didn’t have a gaming worthy computer. But when Need for Speed Underground came out, I had a suitable machine (albeit running Windows Server 2003) and played finally. Good times. Except you see, my game playing is obsessive mode. I play nearly constantly until I win or get hopelessly stuck. So play each new version of Need for Speed for days straight and then uninstall the game and put the wheel back in the closet until the next version comes out. I’ve done Underground, Underground 2, Most Wanted and lately Carbon. I don’t know if they made the game easier or if I’ve just gotten better, but this one I was able to finish career mode pretty much straight through, maybe eight hours total.

In the game you get to purchase cars of your choosing and buy upgrades. All the way from VW Golfs to Lamborghini Murcielago. My favorite car from the game series is the Renault Clio (pictured above). I like the way it handles and it sounds cool. I (virtually) buy it as soon as I can afford it and stuff it full of superchargers and Nitrous.

The weird part is now I want one in real life.

I’d have to import one though, because they don’t sell them here in the states. Autoblog yesterday had a promo video that Renault made featuring the Clio being driven by their F1 driver, which is underwhelming, but there are a few tricked out versions of the V6 model with stunning pictures.

My goodness I have a lot of FireFox extensions addons…

Just want to highlight a couple that might be of general interest.

Adblock Plus: I use this now instead of Admuncher (due to Vista compat problems). It works really well especially in conjunction with the Filterset.G updater, which keeps the list of blocked URLs current

coComment: This lets you keep track of the comments you make all across the web. Haven’t we all dropped in on some blog, plunked down some inflammatory comment and then never returned to survey the damage? I don’t really use the plugin tools so much, but I subscribe to my custom RSS feed. Note, CoreyH supports coComment thanks to Subtext.

Download embedded: If you’ve ever wanted to save flash files or QuickTime movies and the like from pages — things that don’t have a save as feature — this adds that functionality.

Google Browser sync: I’ve mentioned this before obliquely, but it is a tool for syncing bookmarks, cookies, passwords, history and tabs across machines. I shut down FireFox at the end of my workday, pull it open when I get home and everything is there just like I left it. I really appreciate the password portion, don’t you hate it when you get a new machine and have to remember/look up passwords constantly. It even remembers visited link history. Highly recommended, although don’t rely on it for saving tabs in all situations, I’ve been burned a couple times. Oh and please add parallel browser functionality please Google.

And one lazyweb request: an addon sync extension. I have trouble keeping my machines up to date on the latest addons I’m using.

I cashed in my birthday present. A day of racing at Skip Barber racing school at the Lime Rock racetrack in northwestern Connecticut.

You start the day off in the classroom in a lighting round of instruction including the general physics involved, proper racing line, braking, and race style downshifting. After getting fitted for a race-suit, helmet they put in you in the car and adjust as necessary.

There were ten of us in the session I was in, divided up into groups of two or three. We followed the professionally driven pace cars around the track at progressively faster speeds. After a few laps we’d come into the pits and they’d give you some notes, how to improve your line, etc. The cars were the best part. They have relatively low horsepower for a racecar, but the whole thing is very lightweight and the handling is predictably great.

Special props to the Lime Rock circuit as well, the best part being the nice steep up and downhill sections. Coming up over a blind bluff is rivaled only by bombing down a hill with a 90° turn at the end. After three of four laps I was comfortable in the car and itching to go faster than our instructors would allow. By the last laps our top speed on the straight was right around 100 mph. But given the limited classroom time, you can hardly blame them for restricting us. And of course, I really wanted to know who was the fastest, dammit.

As they made very clear at the end by offering a 20% discount with a $200 then-and-there deposit, the real action is in the three-day intensive race class. That’s where they let you go as fast as you can, draft, pass and race the other classmates and get a racing license at the end.

Tip: Do some neck exercises in the weeks leading up to race day and get the padding put in behind your back. Two days later I still have sore muscles in my neck and back.

Thank you Emily and everyone in my family who chipped in for this — and to Vinod for my from-Italy Italian driving gloves. It was an unforgettable day. I am still running laps in my mind when I go to bed at night.