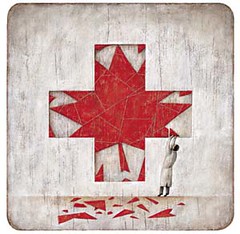 It has long been noted that Canada has a disproportionate number of successful musicians and comedians. If you haven’t heard, loads of your favorite entertainers are from there and the country only has 32 million people (less than Myanmar!).

If you don’t believe me, check out CanadianCelebs.com.

I had a moment while listening to the new Broken Social Scene (Canadian super-indie-group) album where I pondered, wow, it must be a nice feeling to be a Canadian musician. “Free to work on whatever material I want, take chances and know that no matter how risky the artistic endeavor I’ll still have health care. Plus we live in the second largest country in the world by land mass so there’s lots of space and housing prices ought to be reasonable.”

Universal healthcare in the US would have a huge range of implications: good, bad, frustrating, unexpected other. But I would propose that it would be a boon the arts and artists. I could even bore you with some reasons why it wouldn’t even cost everyone else more.