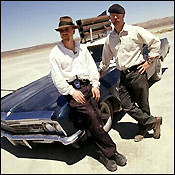 Mythbusters is a good show. For those who don’t know, it is on the Discovery channel where these two guys, Jamie and Adam, special-effects experts, recreate urban legends and various myths testing whether they are “busted”, “plausible” or “confirmed”. It is like a live-action Snopes or Straight Dope. I’ve seen them all and it fulfills my geeky TV quota nicely. In my favorite episode they prove that it is completely plausible that the escape from Alcatraz via rubber boats made from prison issue raincoats could have happened for example.

The thing is, the show really makes me want to move to San Francisco. I’ve been there a number of times and always liked it, after repeated viewings it seems like a really appealing place to be — the weather, the space/elbow room (compared to NYC), the quirky residents and shopowners they meet along the way.

But don’t worry I do not expect to be moving anytime soon.