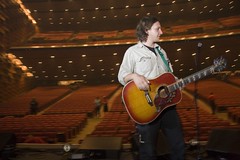 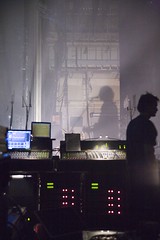 I mentioned in the last post about the trip to Toronto — it is pronounced without the second T btw. We stayed with my brother Kevin, his wife and munchkin. Emily was there to take pictures of Willy Mason who was opening for Radiohead, two nights at the Hummingbird Center. Fantastically wonderfully she was able to secure spots on the list for all of us for the second show, except for the ankle-biter of course.

The venue was swank and spacious, with ample bars and bathrooms. Seats were assigned, which considering what I read at BrooklynVegan’s coverage, was lucky for us — BV commenters were saying that they arrived at 4:30 in the afternoon for the show and were four rows from the stage, the thought of standing in one spot for five, six hours like that makes me shudder.

Willy was great; can you imagine being a young (21) singer-songwriter and being asked to go on tour with Radiohead? These pictures are via Emily’s Experience site.

Again referring to the BrooklynVegan coverage regarding the actual Radiohead portion of the show “of course it was great.” Best show I’ve been to. Can you really say enough about Radiohead? I mean, is there a better band working today?