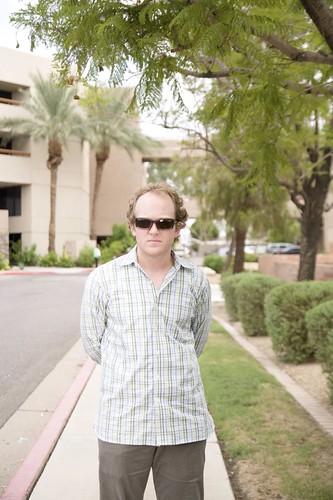 Traveled with Emily as her assistant on a magazine shoot. Assisting means schlepping incredibly heavy and bulky camera equipment through the airports, and trams, and buses and cars, and a few minutes of following “set up the light here” orders.

First stop was Phoenix Arizona. Did one of those sit on the tarmac for three+ hours, go back to the gate, no more flights until the morning, leave the bags at the airport, take a cab home, sleep for a couple hours, and come back deals on the way there, but it was smooth sailing from then on.

Have you heard of these “cities” in Arizona: Scottsdale, Tempe, Mesa? I had and assumed they are real places, but it is a fraud! It is all Phoenix, they just split it up so it would sound like Arizona had more cities than it really does. There are only two cities in that state, Phoenix and Tucson. See for yourself.

Nomenclature aside, it was a great visit. The terrain really does have that rugged desert thing going on, big red rock formations, giant cacti, etcetera. We dined on In N Out burgers and I had just had a Shake Shack burger the week before, so I am in a good spot to make a comparison, and while I don’t usually like pitting foods against one another this way, because I feel that they each have unique qualities that deserve their own attention, time and place — if they were sitting right next door to one another, all things being equal, I’d have to pick In N Out. I think it is the fresh onion that tips the scale for me. Had the best carnitas of my life, and I am something of a connoisseur of this Mexican braised pork dish. It was a short visit so we didn’t really do anything touristy except eat and drive karts at the country’s largest indoor European style karting track. The world championships were the next day, so they had their two 1/4 mile tracks combined into one.

Next up was Maryland. We had an afternoon free, and chose to spend it in Annapolis, with exactly zero fore-planning. Turned out great, they have a really great little setup over there, there’s water all around, and a very walk-able downtown area. They had Segway tours, which would have been perfect if we had more time. Obviously I wanted to get some crabcakes, and the local establishments all knew that was exactly what people wanted because they were between $25 and $40 everywhere including the pubs, a crabcake sandwich was a delicious reasonable substitution for lunch.

Remember when the driving was free? I mean, you had to buy or rent a car, pay for maintenance, and occasionally fill it with gas, but at no point did you ever compute trips to cash, there was no sense of incremental charges. Well, not anymore. An afternoon driving to a different town for lunch cost us $23 in gas (Alamo only had SUVs left).

Google Maps Mobile has good driving directions and now live traffic updates as well. If you pay attention (I recommend a co-pilot) it works as a great poor man’s GPS system. It will step you through the turns one at a time, you just have to pay attention to the car’s odometer (trip-ometer?) to keep track of distances. To get it go to Google.com/gmm on your phone or Blackberry.

The picture is another Sven job. He stands in for the models to test the lighting and whatnot.