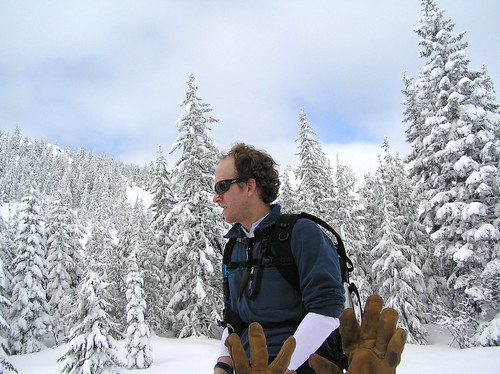 My BU ski team friends and I have an annual ski trip. We’ve only missed two years in the ten since college.

This year, Brennan and I flew out to Seattle/Portland (long story) where Val and Ben took us Easterners on a snow-storm-chase which ended up at Mt Hood in Oregon.

We stayed at the Salmon River Meadows Lodge, skied three days at the Meadows mountain and did one day of backcountry ski touring. Basically that means you hike up and earn your turns.

You put “skins” on the bottom of your skis that allow the ski to slide forward, but not backward. Touring bindings have two modes, one locked down for regular alpine skiing and a free heel mode for going up.

At this particular spot called Tom Dick and Harry Mountain, it took us about 45 minutes to hike up (a minute or so to come down) and we made about four laps.