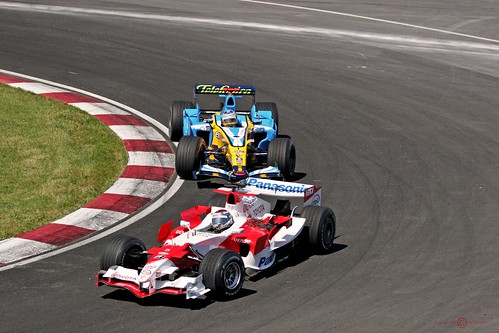 This past weekend was my third annual trip to Montreal for the Grand Prix du Canada. 2004 2005 posts here.

I wasn’t able to borrow Emily’s hot new Canon 5D for this trip, so I didn’t take any interesting pictures, but hey, let’s pretend I took this one and it wasn’t some guy named TMWolf from Flickr.

Fans don’t seem to do it as much in F1 as they do in NASCAR, but you can listen to the teams talk back and forth to the drivers with a scanner. Most of the time they say stuff like “Fuel mixture 7 please Fernando” or “we are going to go up .2 in the front and .1 in the rear tire pressures.” They tell their drivers to “push” when they think they should be going faster. Every once and a while you hear something cool that you don’t hear on TV and makes it feel like you’re just a little closer to the action. David Coultard’s (a Scottish twelve year veteran) engineer came on and said “David, you can not short-cut the final chicane, the FIA is watching” — David: “Yes, I understand that, but I don’t have any f***king grip [unintelligible].”

I share the scanner with Paul aka PineHead and he does all the hard work scanning for frequencies during the practice sessions on Friday and Saturday. I tried to look them up online and found some here, but the teams seem to switch frequencies between races just slightly to throw it off. Plus three of the teams including Ferrari and McLaren Mercedes use a digital system or somehow invert or scramble the signal — even though I believe encrypting the signal is against the regulations. Also, he uses large aviation style headphones and I wanted to use my Etymotic earphones, but since mine are so much more efficient the volume was way way too loud. This year I found a solution: Griffin SmartShare Headphone Splitter with Individual Volume Control Black

I’ll be heading back next year since the prime seats we have require year-to-year purchasing or you get sent to the back of the seat picking queue.