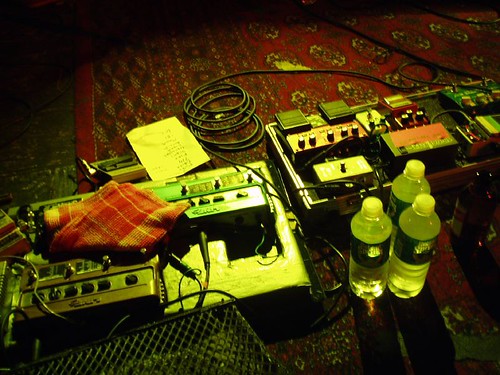 Got to see Broken Social Scene play a private event out in Red Hook (Brooklyn) last night. The guy from American Analog Set played with them for one song, which if you were into either band seriously, would freak you out. Two members of fellow Canadian band Stars were on hand as well.

They are one of my top, top favorite bands of the moment, and I’m really glad I got to see them in such a great environment. In fact Google tells me that I’ve mentioned them twice before on CoreyH.com (once, twice).

I normally don’t go for large, big-sounding bands, with multiple guitars and drummers, but BSS breaks that mold entirely by just being really good at it. At the peak of the show there were nine guys and one woman on stage; there was instrument swapping song to song. Their website lists sixteen people as being “in the band”; but this is a supergroup/wu-tang concept group and many of the members have solo projects, e.g. Feist, Jason Collett.

There’s a video for Fire Eye’d Boy here. Which happens to be the song they are going to be performing on Letterman tonight.

And somehow managing to sneak in technology, you can subscribe to a feed on this site to get by day, who is scheduled to be on Letterman, Leno, Late Late, Conan, Last Call, Daily Show, Colbert, Kimmel, The View, Regis, and Ellen. [Feed] [Site]